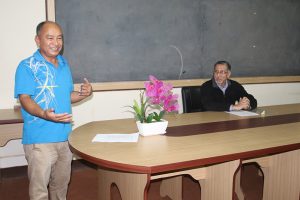 Fr. Vernon came to Nepal for first time as a Roman Jesuit Curia official. As the Assistant General for South Asia, Fr. Vernon D’Cunha made his official visit to Nepal from 6 to 12 October 2018. He has been an Assistants ad Providentiam in the Jesuit Curia Rome. He belongs to Bombay province. After landing in Kathmandu on 6 September, Fr. Vernon based himself in the St. Xavier’s School Jawalakhel community. For next few days, he went around visiting all the communities far and near of Nepal Region. Only the Good Shepherd Community Tipling was not visited due to shortage of time and a too long trek to Tipling. It takes at least one day of walk from the last point of stoppage of any vehicle.
He met each officials involved in various apostolates of the Region and spent some qualitative time with them as he felt the pulse of the Region through these meetings. In his last general meeting with the Jesuits, he expressed his happiness with the Region. He also expressed his sincere appreciation for receiving the wonderful hospitality from each Jesuit community. He left for Rome on October12, 2018.